you know how ‘elders’ would say that kids are now getting smarter as they started young with computers/techy gadgets.’ well, i kind of disagree because we and the rest of the senior generations did not have those computers way back then. we were not exposed to them because we do not have them lying around. but it is our generation who are the computer makers. so i guess we are smarter! =) hehe

anyway, i remember i was around 7 years old when i got hold of those handheld/portable game console (it’s psp/gameboy of now). it was that shoot and shoot kind of game (think about the ‘galaxy’ game, only it was black and white). it was my uncle jonas’ ‘toy.’ i remember how i stayed up to late at night playing it.

then came those ‘game and watch’ by nintendo. i was still elementary at that time. and, it was like the coolest thing at that time. i was grade 3 or 4 when my nanay bought me one. i forgot the title of the game, but the game was like breaking bricks then climbing it until you reach the top. but someone stole it, and it totally broke my heart at that time.

then, next thing i was able to play with was atari. it was my uncle wawis’ toy. my uncle wawis had a great influence in my ‘gaming’ experience. was atari the predecessor of nintendo’s family computer? or atari and family computer both came out at the same time? anyway, the games i can still remember that i played with are — the basic shoot and shoot game, pac-man, popeye. and, the joystick – a real killer! =)

then, it was the summer after grade 5 when my uncle went big time with his ‘kompyuteran’ business. he bought like 3 units of nintendo family computer, and 2 units of sega computer. it 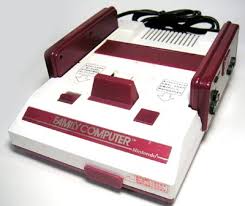 was at that summer that i got my dose of super mario, rambo, and all those games in 99-in-1 cartridge from the nintendo. then, with sega, the games i played were street fighter, mortal kombat (was it on sega?), sonic hedgehog (which i loved most). i guess as a girl, i love more the family computer games than the sega. because sega games were more testosterone driven games. every day of that summer, i was in my uncle’s ‘kompyuteran’ helping him out, and playing when nobody was playing. so came the classes of june, i need to wear eye glasses. =) i guess aside from my eye vision getting blurred, it was at the ‘kompyuteran’ (and, bilyaran/betahan of my uncle wawis), i learned how to deal with boys.

then, after some time, my uncle wawis added Nintendo NES to his ‘game consoles.’ the only game i played on NES was the super mario brothers. i was so fascinated with it’s 3D effects.

then, after the NES, i guess was the ultimate, the first playstation. i was pro’lly highschool already when my uncle wawis got 2 units of it. i still remember, the price was like around 12k or 8k at that time. it was like the biggest thing at that time. everybody’s lining for it. but after playing the tekken, the mk, the racing cars, the duke nukem, and some rpg’s (metalgear, croc, etc), i was not really that sold to PS. because deep in my heart, i’m a big super mario brothers fan! my uncle wawis’ kompyuteran lived only up to PS1. and, same goes with me,my gaming life ended with PS1. =)

i’m reminiscing that part of my ‘life’ because i’m having this ‘flashback’ feeling when i see migi starting or is already hooked into this computer games. if i remember it right, his 1st experience was with my uncle wawis’ PS1 when we had a vacation back home at badian.

mark then bought him a ‘family computer’ (not by nintendo) by some chinese company. it did not last long though. with migi’s roughness, some wires were broken. then, mark got a second-hand PS2. migi did not much play with it. i guess it was a bit too complicated for him. but he loved watching mark playing some games on it.

then, we got wii. i admit it was my idea. i like the idea of wii fitness. but i guess it’s really because i’m a big super mario brothers fan!!! the wii fitness did not happen because migi is hogging it. it’s like a switch in migi was turned on, and made him a gamewhore. his every waking hour is spent on it, which is the cause of our arguments lately.

so we have a new rule about wii playing — he can only play during weekends/holidays. he was able to survive but not a day passes by that migi and i do not argue about it. unfortunately, this kid has parents who are both ‘hardheaded/stubborn,’ so you can picture how it goes.

then, he discovered that celphones have games. so during weekdays, when it’s no-wii time, he put his energy into draining the batteries of celphones, getting his daily dose of gaming time. or then, to his playmates psp/nintendo ds at which some time his playmates complained and told him, ‘papalit sa imo mama, migi.’ =) to which migi would reply, ‘igkapista palit mi ana kay barato’ or he would ‘hambug’ that his papa has one (who said kids don’t lie. maybe only my kids). hearing his answers, i felt like getting him one right away (i’m for DS because again i’m a big mario fan while mark is for PSP) but then we have the ‘buy-toys-only-on-pista-birthday-christmas’ rule. it’s pretty stupid for us to be lawmakers, and be lawbreakers.

but thanks to ninong ador again, who loaned/gave migi his ‘all-in-game’ ala gameboy. it’s the ‘family computer 99-in-1 games made handy.’ =) we’re solved for now.

wow, this is quite long! and, did i just talk about game consoles and such?!? weee, i feel geeky. =)

so what’s your ‘game and watch’ story then?
add: i forgot to mention the ever famous brick game. it was a must have back then. =)